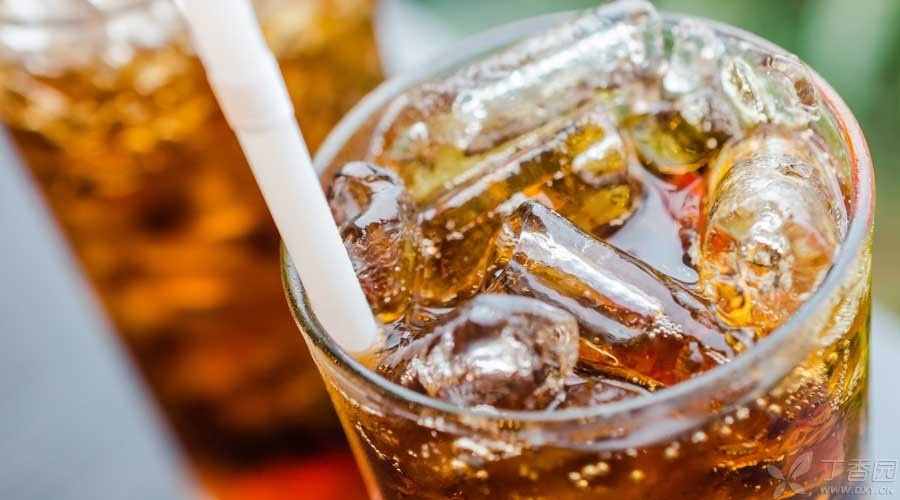 For students who are eager to know the answer but have no patience to read it, let’s give a short conclusion first:

Coke can kill sperm, but there is no need to worry about normal use.

I often hear people around me say that cola cannot be drunk, and drinking too much will kill sperm. As a doctor with higher education and professional quality, of course, I scoff at this lack of theoretical basis.

If I am a familiar friend, I will tell them: these are all fake, don’t believe them, I am a doctor, you have to believe me.

However, it is not used by what. After most people listen to it, [ha ha] once, there is no such thing as that. Whenever this happens, I feel that my professional ability has been insulted…

The Correct Use of Coke [Spermicidal]

Although I know that almost no one will do a large sample clinical randomized controlled trial (RCT) study to prove the conclusion that [drinking cola can kill sperm], and I also understand that it is very unlikely that cola will kill sperm after being diluted, absorbed, metabolized and decomposed by the body, and cross the blood-testis barrier, I cannot produce direct evidence to deny this statement.

Then the question arises, where does this statement come from? Can Coke Really Kill Sperm?

With this question in mind, I searched PubMed and the result was:

Coke can really kill sperm, and the research is still published in the world’s top medical journal, the New England Journal of Medicine.

This is the situation in what. Come down and have a look! 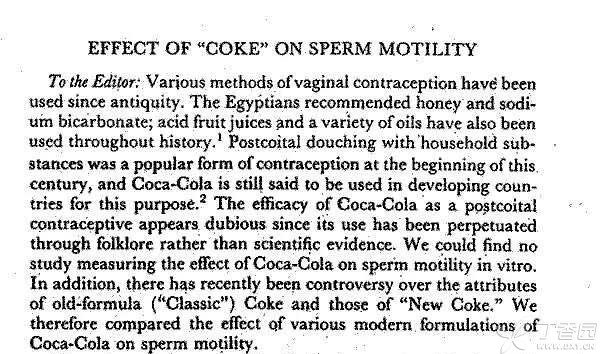 This is a Letter. The author mixed 0.05 mL semen with 0.25 mL different kinds of cola respectively, and took normal saline as control. After mixing, the author placed it at room temperature for 1 minute. The results showed that all kinds of cola could significantly reduce sperm activity! 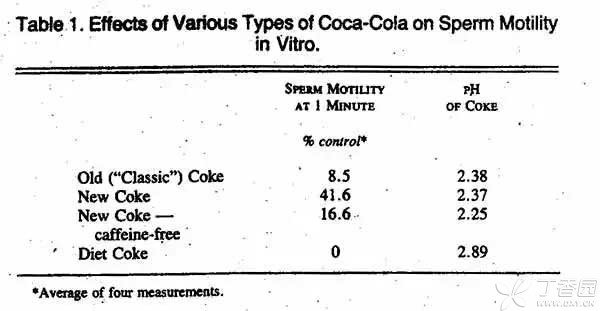 So cola can really kill sperm? The answer is obviously yes. However, the way it is used is wrong. The cola studied by the author is not for drinking, but for… flushing the vagina!

Yes, the purpose of the author’s study is to see if cola flushing vagina afterwards has contraceptive effect. Although cola can kill sperm, the author does not recommend using this method for contraception, mainly because the semen in vagina can reach the fallopian tube in a few minutes and cannot be washed clean, and the sperm killing rate of cola cannot reach 100%.

Well, the result is that sperm will only be killed if soaked directly in cola. The next time someone says that drinking cola will kill sperm, you can also [ha ha].

In 2010, Danish doctor Jensen published a retrospective study to analyze the relationship between drinking coffee and cola and sperm quality in 2,554 young Danish people. The study found that drinking coffee (101-800 mg of caffeine, about 1-5 cups of coffee) and cola (less than 1 liter) per day did not reduce sperm quality. Although the sperm quality of people who drink more than 1 litre of cola per day does decrease, it is still within the normal range, and the study believes that the reason for the decrease in sperm quality of people who drink a lot of cola is more likely to be attributed to their poor lifestyle, not just cola.

This article in the New England Journal of Medicine is the first article on cola and [spermicidal]. Since then, there have been several similar reports, which also study the changes of sperm motility after semen is directly mixed with cola. There is no experimental or prospective study on the relationship between sperm quality and drinking cola.

Then the problem arises again. Just because there is no research does not mean that there will be no research. If you want to get a definite conclusion, you really need a large sample of clinical RCT research.