A few days ago, there was a 2-year-old child who had fever, vomiting and swelling. He took a film and found a small foreign body in his stomach. 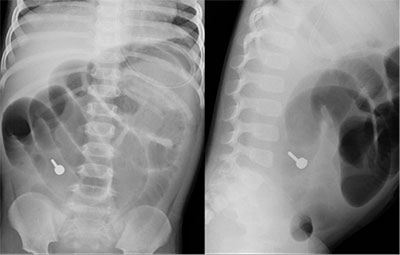 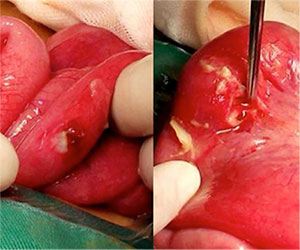 Later, I found the small foreign body in my stomach and took it out. It turned out that a small magnet and a small iron bar were tightly sucked together.

It turned out that the child took advantage of the parents’ inattention and ate a small magnet and a small iron bar one after another. After entering the intestines, the two things were sucked together through the intestinal wall and slowly crushed the intestines, resulting in intestinal perforation. 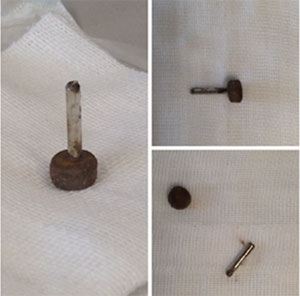 In fact, foreign bodies in digestive tract are very common in children, especially children aged 6 months to 3 years old. Children of this age are curious about what and have no safety awareness. They often put things into their mouths when they get them. Fortunately, most foreign bodies are coins, buttons, hairpins, batteries and the like, which are not as dangerous as the magnets mentioned above.

Once these foreign bodies are swallowed, Will go down the digestive tract like food, However, foreign body hardness is very large and shapes are different. It is often not allowed to pass normally like food. Many checkpoints will allow it to stay in the digestive tract. First of all, the first level is the esophagus, which has three relatively narrow parts, the entrance, the place where it crosses the trachea, and the esophagus passes through the diaphragm and enters the abdominal cavity. Many foreign bodies are stuck in these three positions.

Once the foreign body passes through the esophagus and enters the stomach, 95% can be discharged by itself, most of which take 3-4 weeks within 4-6 days, resulting in less than 1% of digestive tract perforation.

Swallowing common foreign matters such as coins and buttons by mistake, It is estimated that it cannot be discharged by itself. Or toxic, corrosive can be taken out by gastroscope, Otherwise you can wait for it to eject itself, While waiting, the child can eat normally, No need to take what laxatives, Parents need to observe whether their children have abnormal symptoms of what, For example, stomachache, vomiting, fever, pay attention to whether there is blood in the stool, and carefully check the stool to see if foreign bodies have been discharged. If there is no discharge for 3-4 weeks, the possibility of perforation is not very large, but we should be on guard against whether children have digestive tract deformities, such as intestinal diverticula, etc. Foreign bodies sometimes just fall into diverticula and cannot get out.

However, some sharp foreign bodies are more likely to damage gastrointestinal tract, It is relatively more dangerous, Such as nails, A screw, The pin, if it’s still in the stomach, If conditions permit, you should still use gastroscope to take it out. These things into the small intestine again want to take only operation. However, it is not sharp things into the intestines will definitely hurt the intestines, human digestive tract evolution is more magical, several times encountered swallowed 4-5 cm long screws of children, even have open pins, think can’t out, the result of children unscathed out.

Unless it is estimated that discharge is unlikely, Once this kind of foreign body enters the small intestine, it can also choose to wait for its own discharge, but the child must be closely observed during the waiting process. There are indeed some gastrointestinal perforations, such as some relatively long nails, which may puncture the gastrointestinal wall when passing through pylorus, duodenum and ileocecum. Once there are signs of perforation, emergency surgery is required.

Compared with the above two categories, The most dangerous thing is the magnet mentioned at the beginning. Once because the small magnet in the toy fell out easily, Afraid of the danger of children swallowing by mistake, Mattel has also made large-scale recalls. It is very dangerous to eat one magnet and then eat metal foreign bodies that can be sucked or eat more than two magnets at the same time. However, this does not mean that there is no risk if you eat a magnet alone. Many low-cost magnet toys have excessive lead content, which may also lead to lead poisoning. Therefore, children must be kept away from these things.

Gastrointestinal perforation can cause great harm to children, Apart from the scar on the stomach, Serious infections can also endanger children’s lives, Even if there is no perforation, Parents are worried and afraid not to say that their children should also take films and make gastroscopes to bear the injuries that they could not have experienced. If the monitoring is in place, let the children stay away from these foreign bodies that can be swallowed, and most foreign bodies in the digestive tract can be avoided. When the children are not aware of safety, the monitoring and education of parents are of vital importance.

Many parents do not think so. They hope this article can raise people’s awareness and forward it more so that more parents can see it and avoid more tragedies.