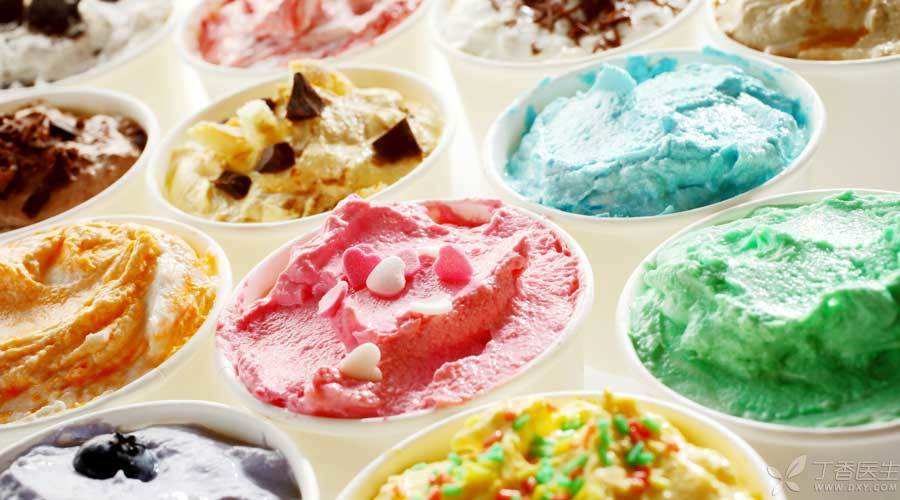 One day, my friend Cat Jie sent a screenshot of her friend Xiao 6 ‘s circle of friends.

Xiao 6 said in the circle of friends:

Today, I went to a strange hamburger restaurant. The menu was marked with the calorie count of the dish. Seeing an ice cream of 330 (thousands) calories, I didn’t order anything. I also don’t think I will patronize again in the future… What does this restaurant think?

The picture she matched was her road map for running 5.26 kilometers outdoors.

Think about it, too, very not easy to run more than 5 kilometers, a total of more than 300 kilocalories, an ice cream down, sweat is not left in vain? On the other hand, if there were no nutrition label, would you have bought this ice cream?

The so-called curiosity killed the cat. After this circle of friends, the cat classmates launched a fierce problem attack on me:

What is this nutrition label in American restaurants? Do we know whether the calories and nutrients we consume every day are reasonable? How many people usually pay attention to food nutrition labels, understand nutrition information and scientifically manage their diet like Xiao 6? Can government decision-making departments realize that small measures in nutrition can bring about considerable health changes? 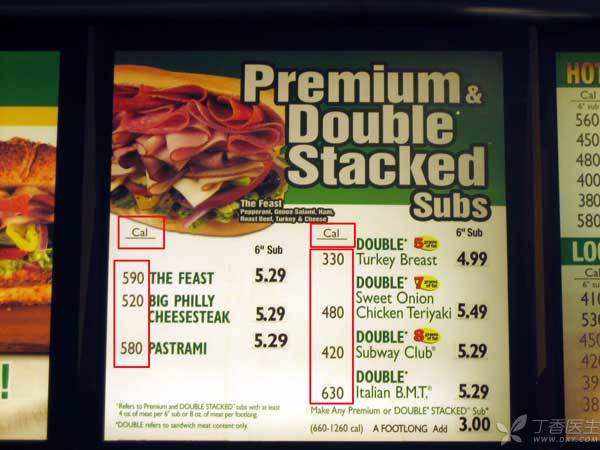 The meal card from Xiao 6 is shocking in calories. 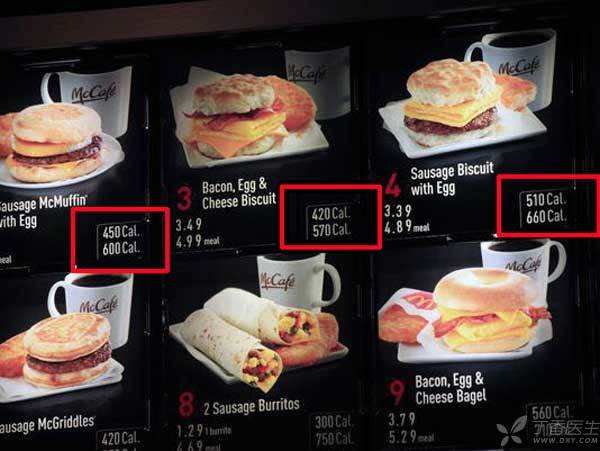 The calories of different sizes of food vary quite a lot.

Because there were too many problems, I decided to write her an article and talk about it.

Let’s go back to the content of this circle of friends at the beginning.

Perhaps you will think that Xiao 6 meets the conscience of the catering industry, which is dedicated to serving the people, does not seek profits, is not afraid of bankruptcy, and pays attention to nutrition education. In China, how many catering owners dare to mark calories on the menu, which scares diners not to patronize again?

But in fact, in the United States, it is required by government regulations to mark the calorie content of food on the menu.

On July 10, 2015, the U.S. Federal government announced that by December 1, 2016, all chain restaurants with more than 20 branches, as well as cinemas, amusement parks, cafes, sweet shops, pizza shops and even salad tables, must indicate the calorie content of food on their menus. Consumers can also ask stores for the content of sodium, sugar and carbohydrates in food.

The purpose is simple: let fast food chains and other businesses try their best to provide healthier food, and at the same time help consumers clearly identify unhealthy food so as to make wise choices.

You know how reluctant American restaurant owners are to see the risk of a decline in turnover.

As a result, the deadline has been delayed by a full year from the earlier deadline, and this is not the first time the FDA has delayed it. The main reason is that restaurant practitioners demand more time to train employees, change menus, make standardized recipes, and develop software to calculate the calorie content of food more accurately.

Anyway, this is already a certainty. Applause.

Looking back on this rule, there is another very important person: US First Lady Michelle Obama. 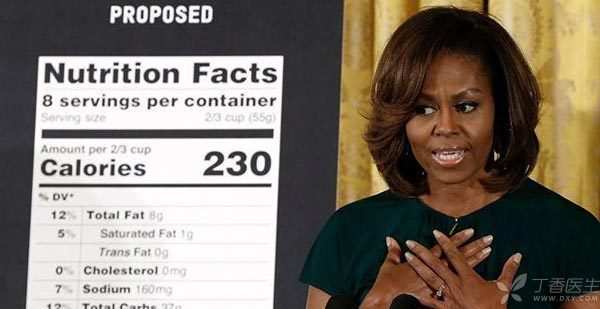 Since Obama was elected president of the United States in 2008, he has been working hard to promote a healthy diet for Americans, and Michelle has also included the promotion of good living habits and the solution of obesity in her work priorities.

The United States issued the Nutrition Labeling and Education Act as early as 1990, requiring food to be uniformly labeled with nutrition labels and implemented before 1994. The first major revision in 20 years was jointly proposed by Michelle and the U.S. Food and Drug Administration (FDA) in March 2014.

In addition, in 2010, FDA passed the Patient Protection and Evaluation Medical Care Act. In order to solve the obesity problem, it is necessary to provide corresponding nutritional information for the food consumers buy in restaurants. After repeated discussions, FDA finally announced the Restaurant Menu Labeling Regulation on December 1, 2014 as a supplement to the loopholes in the previous Act. Currently, it is in the preparation period for relevant restaurants.

[Nutritional Environment] Has Not Been Paid Attention in China

Current Situation of Nutrition Labels in the United States

Nutrition labels in the United States have mandatory labeling items: they are called [1 + 14]. 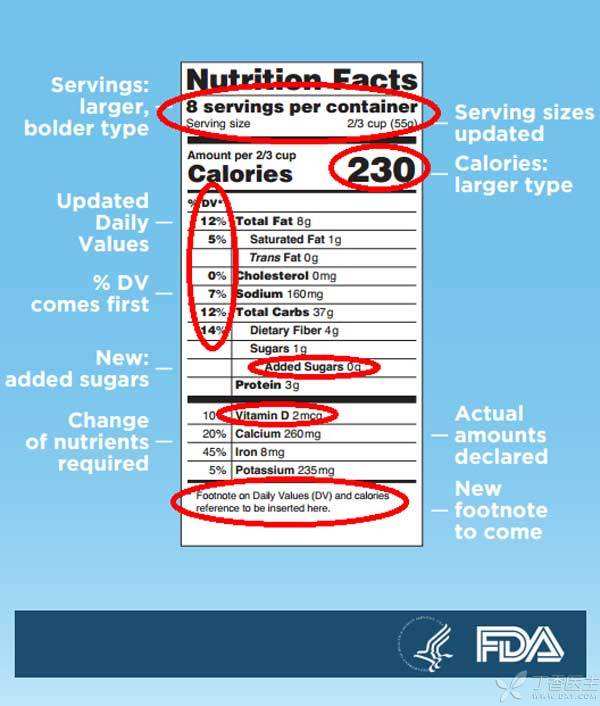 The above picture shows the new version of nutrition label after Michelle pushed forward the label reform. Compared with the previous one, there are great changes, ranging from the types of nutrients to the formats, fonts and even footnotes, all striving for perfection.

Compared with the nutrition labels with a history of more than 20 years in the United States, China’s national food safety standard < < General Principles of Nutrition Labels in Prepackaged Foods > > (GB28050-2011) has been released in 2011 and implemented in 2013 for only a few short years, and can only be regarded as a baby in infancy.

At present, only packaged foods are required to be labeled with energy and carbohydrate, protein, fat and sodium, i.e. [1 + 4] related information. No requirement has been made for restaurant menus to make nutrition labels, and there is still a long way to go before they can be perfected.

Is the nutritional environment what?

Tell me a little story that happened to me.

On one occasion, I followed my mentor to try to do a small topic, hoping to understand how much impact the improvement of the nutritional environment of Chinese and Western fast food restaurants can have on consumers’ ordering behavior, so as to achieve the goal of improving eating habits and nutritional structure.

However, at the beginning, the middle and even the end of the topic, they were questioned by the judges and teachers many times: Did you coined the word “nutritional environment”? Is there any research support? Or you may ask, aren’t you doing the relationship between ecological environment and nutrition? …… Then, can only take out foreign decades ago began to carry out research data, repeatedly explain.

Experts with food and nutrition-related backgrounds like this are still so unfamiliar with [nutritional environment]. How much can other groups know? Studies show that less than 50% of consumers often read nutrition labels. However, the proportion of people who ask for nutrition information in restaurants is even lower.

All these further show that we still have a lot to do to create a good nutritional environment, implement and promote nutrition labels.

As doctors, can we be what?

I think all doctors should pay attention to the impact of nutrition on their work.

It is hoped that it can actively promote the Government’s attention and influence the formulation of relevant nutrition policies.

We can influence the people and patients around us a lot and attach importance to nutrition from a small point of view.

Communicate more with nutrition doctors; This week or next week, < < Dietary Guidelines for Chinese Residents (2016 Edition) > > > will be released. You can pay attention to this news and learn about the daily recommended nutrition suitable for individuals. Obtaining knowledge and information on diet and nutrition from scientific sources and replacing erroneous rumor information in time; Dining out pays more attention to the nutritional environment than just reviewing the ranking. Use more food nutrition label information to purchase food; Give more nutrition education to the people and patients around you; Buy food scales, salt spoons, oil jugs and other healthy kitchen tools.