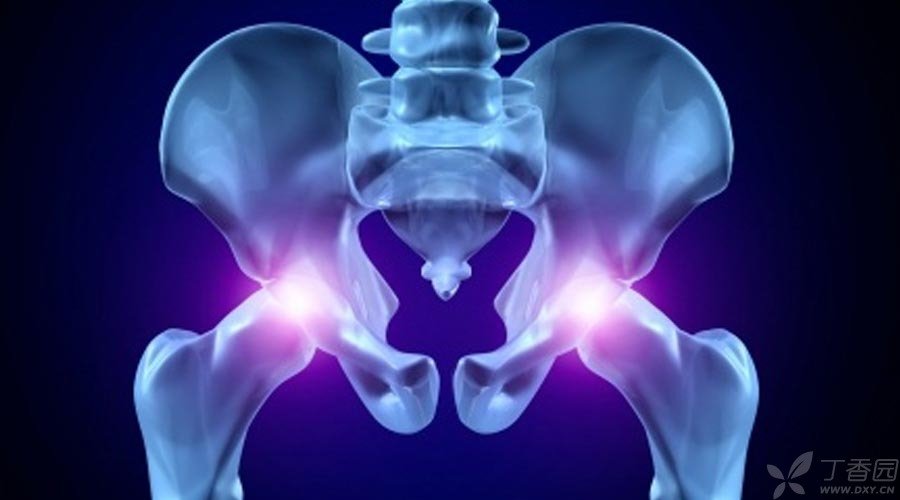 With the popularization of pediatric knowledge, many parents are very alert to some diseases. For example, some parents find that their children’s hip dermatoglyphics are asymmetrical and immediately think of whether their children have developmental dislocation of hip (DDH). Compared with many children with dislocation of hip joint before, they have not found it for a long time and finally have to undergo major surgery to correct it. This is an improvement.

However, the improvement of vigilance has also brought a lot of anxiety to many parents. Is dermatoglyphic asymmetry DDH? How do you rule it out? What tests are required? Do you want treatment? These problems often afflict parents. Although I am not a pediatric orthopaedic doctor now, I have also been a chief resident in orthopaedic department before. It happens that my daughter also had this problem, so I still have some knowledge and experience to share with you.

The hip joint is mainly composed of acetabulum and femoral head. Their structure is like the pestle and mortar in the following figure. The acetabulum is the mortar and the femoral head is the pestle. 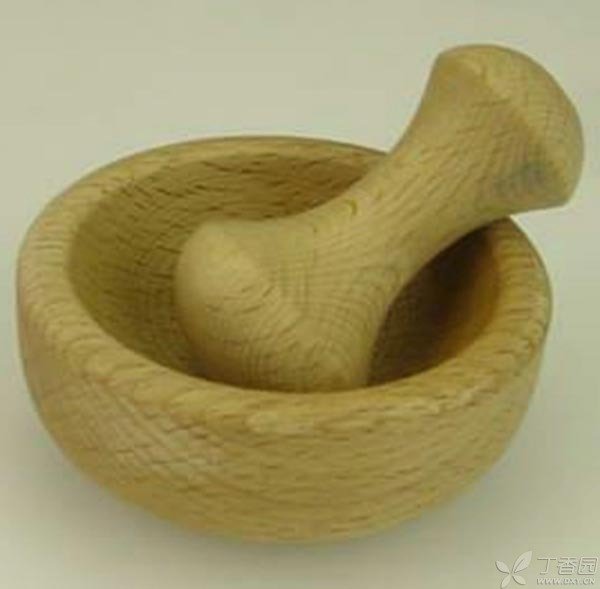 The difference is that the hip joint’s joint capsule and ligament fix the pestle in the mortar. The onset of DDH is due to various reasons. The pestle cannot be fixed in the mortar, but can slide and run outside the mortar.

Relationship between dermatoglyphic asymmetry and DDH in thighs

Shortly after her daughter was born, I found out that her thigh dermatoglyphics were asymmetrical, I know that female sex is a high-risk factor for DDH, and the incidence rate of girls is 2-5 times that of boys. I also know that all factors that restrict fetal activity space, such as the first child, heavy birth weight and oligohydramnios, may increase the risk of DDH, and she accounts for two of these three factors. She is the first child and oligohydramnios is also the late pregnancy.

DDH in the neonatal period can have no symptoms, in order to avoid delaying treatment, appearance completely normal newborns should also be screened, there are thigh dermatoglyphic asymmetry of children should naturally have a good examination. Fortunately, he is a child surgeon, can immediately begin to do it for her. 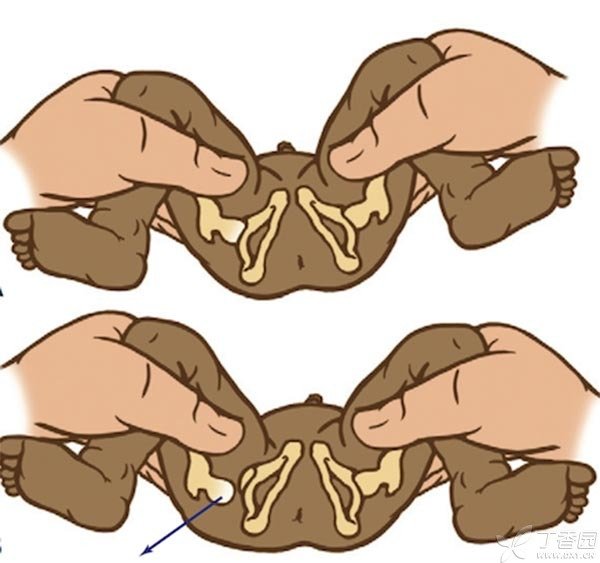 In a warm room, let the child lie flat on the bed, take off his clothes and trousers, hold the child’s lower limbs as shown in the figure below when the child is quiet, bend his knees, let the hip joint be adducted, and exert his thumb as hard as the arrow direction. This is called Barlow experiment. If you feel the bone bouncing or beating, it may be a problem.

On the contrary, as shown in the figure below, while abducting the hip joint, hold the finger on the outside of the thigh and exert force in the direction of the arrow. If you feel the bounce or beating of the bone, it may be that the femoral head slides into the acetabulum from the outside, which also indicates that there may be dislocation. This is called Ortolani experiment. 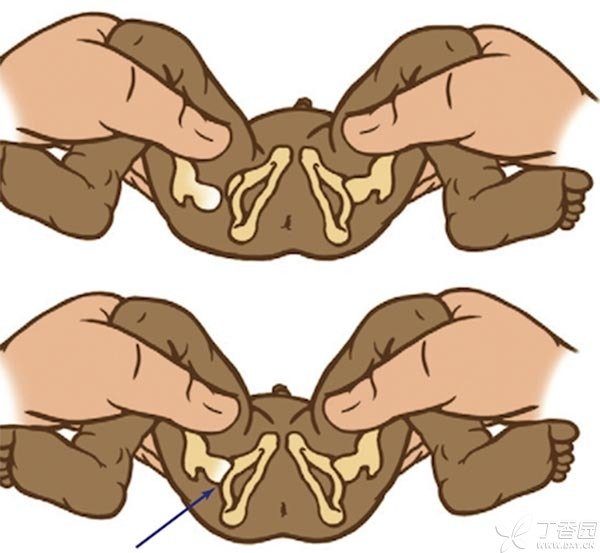 However, these two tests are mainly suitable for newborns with relatively loose joints. When the child is two or three months old, the joints are relatively tight, and the above two examinations are unreliable. However, there are other examination methods. The most commonly used method is to let the child bend his hips and knees and lie flat as shown in the following figure. Then compare the height of the two knees. The dislocated knee will be lower. This is called Allis’ sign or Galeazzi sign. 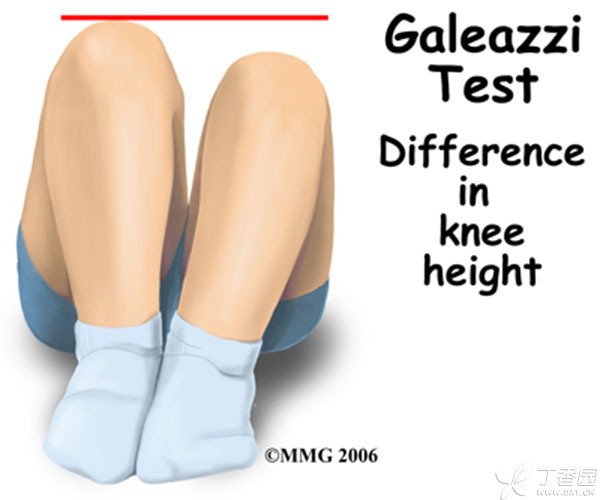 Another reliable examination is the abduction experiment of hip joint. Normal hip joint can be abducted to 80 ~ 90 degrees, while DDH children’s abduction is obviously limited, and some can only be abducted to 40 ~ 50 degrees. 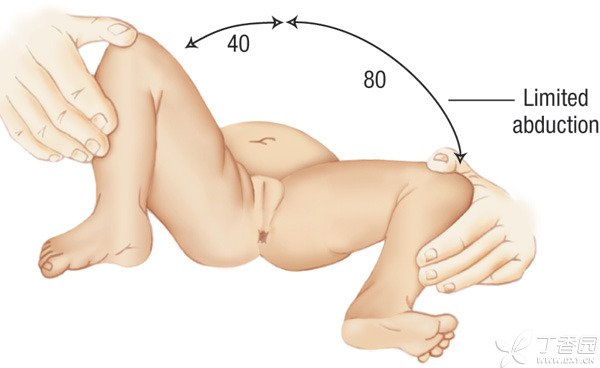 I did these tests on my daughter, No what problem has been found, But still a little not at ease, Then we have to go to the hospital for further examination. If the child is more than 6 months old, Photography directly look at the bone will be more reliable, according to the relationship between the femoral head and acetabulum under X-ray, can basically determine whether there is dislocation and dislocation degree. But before 6 months, the child’s femoral head is mainly cartilage, not visible under X-ray, unable to judge the position, but ultrasound can probe cartilage.

In Europe, newborns are routinely screened for DDH by ultrasound, Ultrasound has no radiation, It can also detect cartilage that cannot be detected by X-ray, This is its advantage, However, it is greatly influenced by the experience of the examining doctor. And the false positive rate is higher, Some normal children will also report abnormalities when performing ultrasound, Especially for newborns, the result has led to unnecessary treatment for these normal children. Other studies have found that ultrasound is not more reliable than physical examination for newborns. Therefore, the United States does not recommend all newborns to undergo routine ultrasound screening. The incidence rate of DDH yellow race is far lower than that of white race, so routine ultrasound screening is not needed.

If DDH is discovered early, It’s easier to treat, Children suffer less, So I went to give my daughter an ultrasound, Fortunately, there is no problem. DDH used to be called congenital dislocation of hip (CDH). It was later discovered that the disease was not entirely caused by congenital factors, So it changed to developmental dislocation of hip (DDH), This shows that post-natal factors also play a great role, For example, the lower limbs are bound and swaddled in swaddling clothes The child’s lower limbs are fixed in inappropriate positions for a long time, Will increase the risk of DDH, This is also the reason why the incidence rate in the northern region is much higher than that in the southern region. So to be on the safe side, I told my family not to wrap their children in swaddling clothes, but to carry them with braces so that their lower limbs can spread out like frogs, so that the femoral head can cling to the acetabulum to reduce the risk of DDH. The child did not find any abnormalities after walking, so there is no need to worry at all.

However, if the child is diagnosed with DDH, treatment is required. The principle of treatment is to fix the pestle in the mortar, so that the pestle and mortar stimulate each other to develop and form a stable joint.

The sooner you treat it, The simpler the treatment, The effect is good, Some only need special braces to fix the lower limbs, Some need plaster fixation. If DDH is not found in time, When the child starts walking, he will limp. Because the lower limbs are not equal in length and bear uneven strength, walking is like a duck shaking and swinging, and the deformity of joints will be further aggravated due to weight bearing. It will be much more difficult to treat at this time. Some children will also suffer from surgical trauma, and osteotomy is required in serious cases. The risk is great, and the effect is not necessarily good.