The US President Killed by Medical Accident? No, it was the assassinated president who promoted the development of medicine.

Today, I want to tell you a sad story about the fall of [genius].

The hero of the story is James Abram Garfield.

You were a what when you were 33? I knocked these words on the lamp at the table for the sake of Gao and chou. Nearly 200 years ago, this genius had already discovered one of the methods to prove the law of hook shares.

Garfield was born on November 9, 1831, in the destitute countryside of Ohio. He lost his father on his second birthday and did not wear shoes until he was four years old. But he grew up rapidly. In addition to Gogh’s Law, he was already a congressman, a general in the army, a president (professor) of the university and a great elder of the Christian Church before 33.

It is said that this genius died of assassination.

However, in fact, from the perspective of modern medicine, the president did not die of gunshot wounds, but died of improper treatment by doctors.

In other words, it was actually a medical accident that killed him. However, this incident also promoted the development of surgery.

The tradition of the assassination of a president

So we joked that the United States has a tradition of guns and presidents being assassinated. However, compared with other presidents, Garfield’s assassination is so low-key. 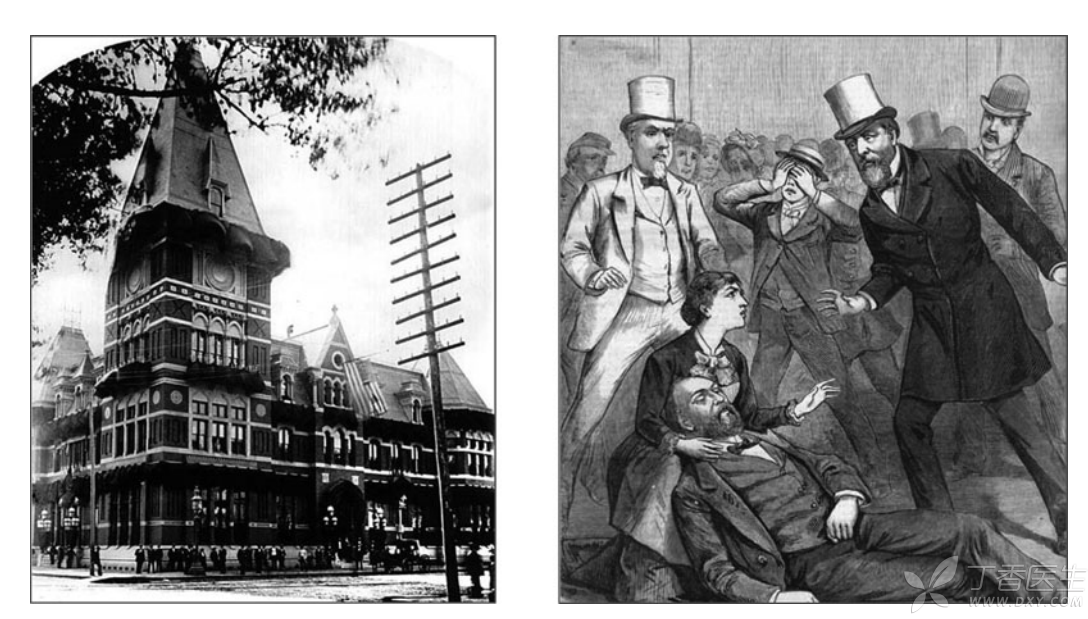 On July 2, 1881, the assassination took place at the railway station in Baltimore, USA. Assassin Charles Guiteau used Cole’s 44 caliber pistol and fired two shots at the president only a few yards away. One shot hit the arm and the other shot hit the president in the back and remained in his body.

However, from then on, President Garfield’s nightmare really began.

A pistol used by an assassin 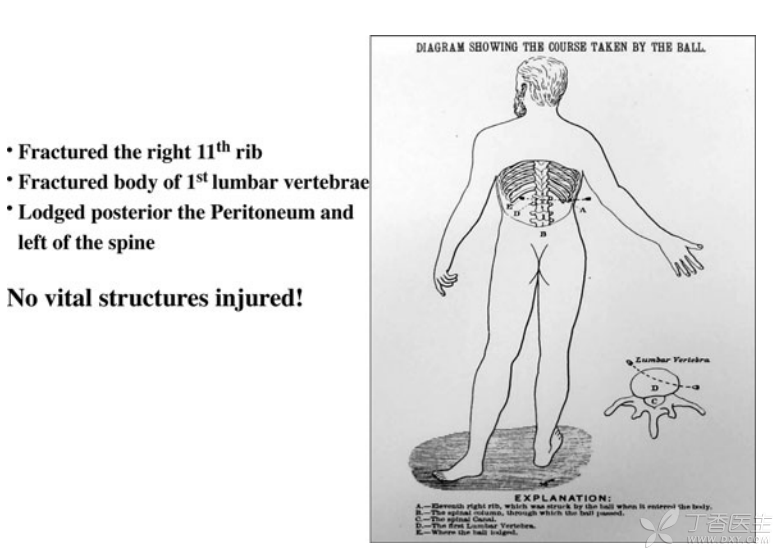 The picture on the right shows President Garfield’s gunshot wounds.

From today’s analysis, the bullet that penetrated the president at that time did not damage any important organs, but was directly embedded in the spine.

For today’s emergency department or surgeon, In the face of such a patient, the first reaction may be to take an X-ray or CT as soon as possible and contact the operating room for surgery at the same time. But for surgery in 1881, there was no X-ray, no CT, no disinfection concept (Liszt’s disinfection concept began to spread in the European continent in 1860s, but it did not spread in the United States until 1890s), or even a pair of surgical gloves (1889).

In the midst of the turmoil, Everyone sent a message, Looking for a doctor who can treat the president. Dr. Smith Townsend, The District of Columbia health official was the first to arrive at the scene. Dr Charles Purvis, then one of the few African-American doctors in Washington, was the chief of surgery at Freeman Hospital. The second came to the president’s side and examined the bullet wound. He became the first black doctor to treat the president of the United States.

Several doctors arrived later and all of them poked their unwashed fingers and unsterilized instruments directly into the president’s wound.

Then Defense Secretary Richard Todd Lincoln, who was also the eldest son of the assassinated President Lincoln, called in Dr. D. W. Bliss, the best military doctor at that time. When Bliss arrived, he quickly assembled and took full control of President Garfield’s treatment.

After a brief interview with several surgeons, He put a probe with white ceramic forceps on the front into the wound to determine the location of the bullet. Ten years before X-ray was invented, This method was used to locate the bullet. If the tweezers hit a bone, it would still be white. But if the tweezers hit a lead bullet, the tip of the tweezers would turn black. Finally, the bullet could not be found, and President Garfiel was eventually sent back to the White House for further treatment.

Since it has always been impossible to locate the bullets injected into the body (lead bullets staying in the body will also cause chronic lead poisoning), after numerous consultations, different doctors have been brought to probe into the president’s body with various instruments. Instead of finding the bullets, they have caused additional infection and even pierced the liver in one probe.

For this reason, they specially called Bell, the great inventor at that time (who invented the telephone), They invented an instrument that can detect metal substances, but they forgot that the president was on a metal bed, so this instrument was also ineffective for the president. Finally, because the president could not eat and did not have the concept and operation of complete parenteral nutrition at that time, the president lost 100 pounds (about 45 kilograms) in the last two months.

Finally, due to the high fever in Washington, D.C. At that time, As well as the fact that the White House is not suitable for patients to recuperate, the President finally moved to a country house on the coast of New Jersey. At this time, the President was terminally ill. However, for an unknown purpose, until a few hours before the President’s death, his medical team still made a wrong evaluation of his overall situation and thought that his general condition was good.

Later, Dr. Daniel S. Lamb conducted an autopsy of the President, which found that the shooting did not cause fatal injuries or damage to any important organs. However, multiple pus cavities were found in his body. The final cause of death at the autopsy was widespread infection and severe failure (malnutrition) after the gunshot wound.

As the assassin finally said in the court debate:

I didn’t kill the president. I just hit him. It was the doctor who killed him.

In the end, despite all kinds of chicanery, the assassin was sentenced to hanging one year later. Then for the entire American surgical community, the shock was much greater than the death of a patient.

Before, the U.S. Surgical community had the first anesthesia operation in 1846 in the [Ether Hall] of Harvard Massachusetts General Hospital, but surgery was basically used as battlefield first aid and some minor surface operations.

At the same time, Liszt, who has widely publicized [sterilization] on the European continent, Come to the United States for promotion, At that outset, This theory has been scoffed at by surgeons in North America, However, the assassination of the president and the subsequent autopsy changed the view of the then North American Surgical Association and widely promoted it afterwards. Including the subsequent invention of surgical gloves, the invention of various disinfection instruments, and the application of various new technologies and equipment to the surgical field, ushering in an era of rapid development.

One hundred years later, in 1981, President Reagan was also shot by gunmen, A bullet bounced into the car from the open door, From Reagan’s left armpit, Brushed his ribs, Through the lungs, Stay only an inch from the heart. After being shot, Reagan lost more than 50% of his body’s blood, Complicated with dyspnea, Blood pressure drops to zero, On the verge of death. He was rushed to the emergency room of the nearby well-equipped University of Washington Hospital. Doctors immediately carry out intravenous fluid infusion, oxygen supply, tetanus toxoid inoculation, chest tube insertion, etc. (all according to strict aseptic operation), Soon the blood pressure basically returned to normal, and then he entered a well-prepared operating room, where thoracic surgeons performed emergency operations to stop bleeding and remove bullets. Although the operation had symptoms of fever, doctors used various antibiotics to control the infection, and the nursing facilities were complete. Reagan was discharged from hospital on the 13th day after admission and basically recovered about half a year later.