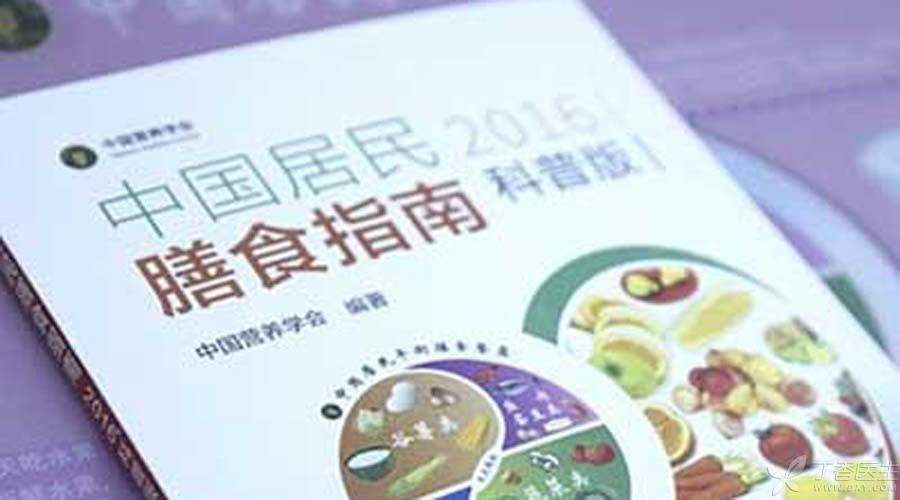 Ten years to sharpen a sword.

The Dietary Guidelines for Chinese Residents (hereinafter referred to as the “Guidelines”) have not been revised and released since they were revised in 2007.

On May 13, 2016, at the regular press conference of the National Health and Family Planning Commission in May, the long-awaited “Dietary Guidelines for Chinese Residents (2016) >” was officially released.

After the press conference, Professor Ma Guansheng from the Department of Nutrition and Food Hygiene, School of Public Health, Peking University, one of the revisers of the guide, was interviewed.

The revision process of the new edition of the guide and several major changes after the revision are exclusively interpreted.

Why is it revised only once every 10 years?

The first edition of the Dietary Guidelines for Chinese Residents was released in 1989 and revised and released twice in 1997 and 2007. From the time point of view, almost every 10 years, the Chinese Nutrition Society will organize an expert committee to revise the guidelines and issue a new version of the guidelines.

Professor Ma introduced that the revision time of the guide is not clearly stipulated and must be revised every 10 years. In the revision time, as the first two revisions are almost 10 years, the revision of the new edition is also carried out according to this time.

The revision of the guidelines is mainly based on the changes in food consumption and dietary nutrition of Chinese residents, as well as the major nutrition and health problems.

Professor Ma said that in the past 30 years or so, China has carried out a national representative nutrition survey every 10 years, which was conducted in 1982, 1992, 2002 and 2012 respectively. In June 2015, the National Health and Family Planning Commission announced < < Nutrition and Chronic Disease Status of Chinese Residents (2015) > >.

Through these representative investigations, we can timely understand the main problems existing in the food consumption, dietary nutrition intake and nutrition health of Chinese residents. This is the first point. Second, in recent years, there have been new discoveries and new evidence in the research on the relationship between food, nutrition and health. Third, residents’ demand for diet, nutrition and health continues to grow. For several comprehensive reasons, the revision of the guidelines has been initiated.

Is there any change in what in the new dietary guidelines?

As one of the drafters of the new edition of the guide, Ma Guansheng believes that there has been no subversive change in content, but there are two obvious changes in the revision process.

First, the revision process is more standardized and scientific.

Referring to the WHO’s procedures for revising the guidelines, the revised guidelines have drawn up a procedure that is more standardized and scientific in the whole process.

The second is to use the method of inquiry to demonstrate the contents of the dietary guidelines based on new research and discoveries in the field of nutrition and health.

Among them, it includes searching published scientific documents, reviewing, synthesizing and analyzing these documents, and summarizing relevant evidence on the relationship between food consumption, behavior, etc. and health.

In terms of quantity, it seems to have decreased, but the actual content has not decreased. In Ma Guansheng’s view, the seemingly simple eight words are actually brilliant, rich in content and easier for ordinary people to remember.

In fact, the Dietary Guidelines for Chinese Residents are all corresponding suggestions for some dietary and nutritional problems existing in the current Chinese residents. Therefore, this edition of the Guidelines also continues the practicability and operability of the previous guidelines, with more emphasis on being able to be used by the general public.

Change 2: The new version highlights the concept of “balanced diet”

If you study the previous three editions of the guidelines, you will find that each edition of the Dietary Guidelines has its own emphasis. For example, the 1997 edition emphasized that everyone should eat more milk and beans and pay attention to calcium supplement.

However, in the latest edition of the guide, the concept of “balanced diet and balanced nutrition” is more emphasized and highlighted, [but the consumption of milk and soybeans, vegetables and fruits previously emphasized will continue to be emphasized.]

Ma Guansheng explained, [Since the consumption of milk and soybeans by Chinese residents has not increased in the past 10 years, Article 3 of the new edition of the guidelines has been changed to eat more fruits and vegetables, milk and soybeans, and some major problems must be emphasized.]

Each revision of the guide is an improvement to the original guide.

However, compared with previous dietary guidelines, The biggest change is the addition of vegetarian diet. In fact, Vegetarianism has become a fashion in recent years, Many residents in our country are vegetarian on the basis of religion, belief, environmental protection, health and other reasons. Vegetarianism, If the meal arrangement is not reasonable, It is easy to suffer from the deficiency of protein, vitamin B12, n-3 polyunsaturated fatty acids, iron, zinc and other micronutrients. Vegetarians should obtain high-quality protein by increasing the consumption of soybeans and bean products, eat some whole grains, nuts, bacteria and algae regularly, and choose a variety of cooking oils to meet the need for essential fatty acids.

Change 4: The concept of [healthy weight] is mentioned at the top of the recommendation.

Obesity is a risk factor for many chronic diseases.

Although the public knows that the impact of obesity on the body is mostly negative, the obesity rate in China has increased instead of decreasing in the past ten years, and the incidence of chronic diseases related to obesity is also increasing year by year.

In 2015, the World Health Organization (WHO) published its Sugar Intake Guidelines on its official website, updating its recommendations on sugar intake restrictions. The guidelines strongly recommend that both children and adults should control their sugar intake to less than 10% of their total energy intake to prevent health problems such as obesity and dental caries.

The new edition of the Dietary Guidelines for Chinese Residents also refers to WHO’s recommendations and adds [sugar control] to the body of the recommendations for the first time.

It is proposed to limit the intake of added sugar, No more than 50g per day, preferably within 25g. Ma Guansheng explained that added sugar refers to monosaccharides, disaccharides or sugar alcohols added in the cooking and processing of food. The main sources are sugary beverages, cakes and some sugary dishes. Excessive intake of added sugar will increase the risk of dental caries, obesity and type 2 diabetes.

Since 1997, China’s Nutrition Dietary Guidelines have launched the “Dietary Nutrition Pagoda for Chinese Residents” to tell the public in graphic form the best dietary mix and the best daily intake of eggs, milk, meat, fruits and vegetables.

In the past version, every time a new guide was issued, the Dietary Nutrition Pagoda would make fine adjustments to different degrees. Take the 2007 version as an example, the water intake would be increased on the 97 version.

Ma Guansheng introduced, The 2016 edition of the guide still continues the previous style, [the pagoda has not changed in form, it is still in the form of a pagoda, only minor adjustments have been made in the suggested food intake.] In order to be more vivid, practical, easy to understand and operate, this time [two new figures have been added, one is the balanced meal plate for Chinese residents and the other is the balanced meal abacus for children.]