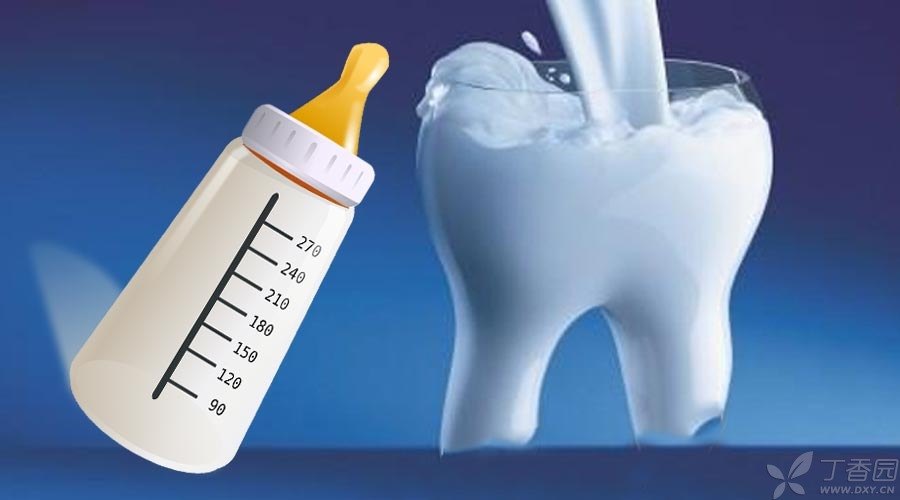 I don’t know if any parents or friends have ever seen such news: [a three-year-old boy bit his classmate and was cut off four front teeth by the other grandmother]. The news said that a kindergarten child and his classmate had a fight because he bit the other party and was retaliated by the other party’s family and cut off four front teeth in his mouth. In order to prove the truth of the matter, the news also has a picture: 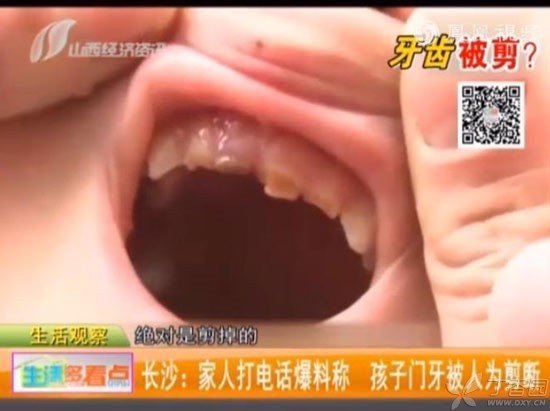 The incident was really appalling. Therefore, many media reprinted it one after another. Netizens were shocked and made comments such as “What’s wrong with this society” and “Bad people are getting older”. Some even swore loudly that “the murderer who cut off children’s teeth” must be severely punished by law.

This news is really full of doubts. You see, the teeth in the child’s mouth are indeed [Qi Gen Broken]. Four teeth were broken at once, which is really terrible. However, the section is not neat, and there are yellow residual roots on one tooth, with traces of corrosion in the middle. Moreover, how much strength does it take to cut small deciduous teeth and hold the child down? How precise is the power? Did you sneak into the kindergarten with an electric drill and break your teeth after anesthetic the child’s general anesthesia? Don’t children cry and struggle? If you struggle, won’t you be stabbed by scissors in other parts of your mouth? Where is the kindergarten teacher? Sit down and let parents commit crimes?

Let’s see what doctors think of the news.

Zi Zhang Ye (Doctor of Children’s Dentistry): [Teeth cannot be cut off so easily. Judging from the picture, it is typical bottle caries. We should take out photos of healthy teeth before the child was cut off. There is no comparison (just) no evidence. How dentists wish they had such magical scissors, even teeth can be cut short, and dental drill machines can be used in the future.]

Clove-Wutong (Doctor of Children’s Dentistry): [It is impossible for intact teeth to be cut off. There are not so many scissors. Looking at the picture, the child’s teeth were originally decayed. It is estimated that after external force, the originally fragile decayed teeth were broken.]

Dentist Shen Song (Director of Oral Center of Peking University Hospital): [What kind of scissors are these? Give me one too, and I will no longer bother to grind my teeth and use scissors instead.]

Many doctors believe that the statement of “cutting teeth with scissors” is not credible. The child had dental caries before, and Dr. Zhang Ye even pointed out that it was probably “bottle caries”.

So is what bottle caries?

Bottle caries, also known as breast-feeding caries, is a kind of dental caries caused by infants sucking bottles continuously during sleep. The most common manifestation is large-area caries on the lip side and adjacent surfaces of incisors. With the passage of time (the child in the news is already three years old), it will spread to canines and even the molars behind (so [four were cut off at once]).

Bottle caries are not obvious at the beginning, It is mainly a chalky demineralized zone at the root of incisors. With the development of caries, The demineralized belt will become darker and darker in color and wider in scope, surrounding the teeth, peeling off the hard tissue of the teeth, eventually turning into cones and even forming residual roots. Due to the low calcification degree of deciduous teeth (commonly known as “soft teeth”), the disease progresses rapidly after caries, the damage area is wide, and the treatment effect is poor.

In order to let everyone have a more specific understanding, let’s take a look at the picture of bottle caries: 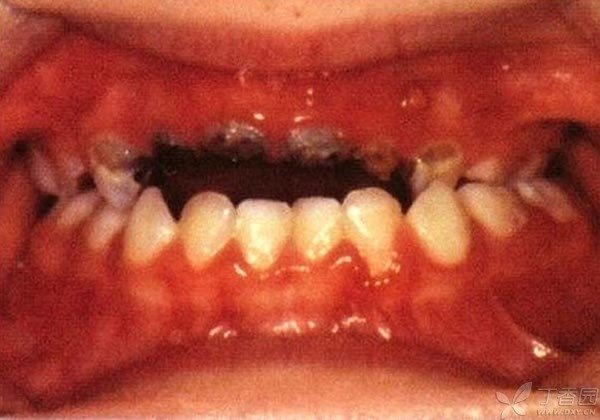 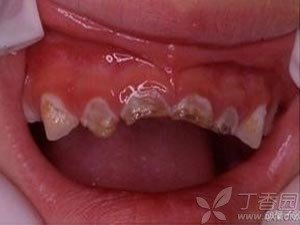 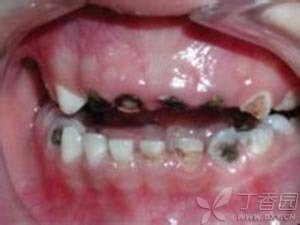 How is it? Is there also the effect of [cutting off the root], and it is also [four teeth]?

Harm of Caries in Deciduous Teeth

Many parents think that it doesn’t matter if deciduous teeth have dental caries, they all want to fall off anyway, and it is good to wait for permanent teeth to grow out. In fact, it is not. Not to mention how children who do not have good tooth protection habits during the deciduous tooth period can protect permanent teeth, deciduous tooth caries does not mend, which will cause many hazards first.

First, children often dare not use it because of dental caries on one side and pain during chewing. Therefore, they will chew on the healthy side. In the long run, they will form the habit of unilateral chewing, thus affecting facial development.

Second, if deciduous tooth caries is not treated in time and develops into pulpitis or even periapical periodontitis, it may affect the development of permanent tooth germ below and cause enamel dysplasia.

Third, deciduous teeth are natural gap holders. If they fall off prematurely due to caries, the rear teeth may move forward, and the inherited permanent teeth may erupt ectopic in the future, resulting in malocclusion.

Four, deciduous tooth caries cannot be treated in time and develops into periapical diseases, which may induce rheumatoid arthritis, nephritis, endocarditis and other systemic diseases.

Five, deciduous tooth caries (especially the anterior teeth) may affect the appearance and pronunciation, and even cause certain impact on children’s psychology.

Prevention of Caries in Deciduous Teeth

In order to prevent children from bottle caries, parents should correctly use bottle feeding, enhance children’s physique, and pay more attention to children’s oral hygiene. Specifically, the following should be done:

1. The baby’s oral cavity should be cleaned before the first deciduous tooth erupts, so that the baby can get used to cleaning the oral cavity.

2. Wipe gums with a clean soft cloth. After teeth erupt, use a soft toothbrush to clean dental plaque twice a day. You still need to clean your mouth after eating each time.

3. Don’t let babies contain bottles when they sleep. Milk, baby food and fruit juice are all sugary. If sugary drinks stay on babies’ teeth for too long, they will cause caries.

4. Attention should be paid when the baby contains the bottle during sleep or between meals: the bottle can only contain water.

6. The most effective defense against dental caries is fluoride. This mineral is found in most tap water. If your drinking water does not contain fluoride, please consult your dentist about the dosage of oral fluoride tablets. At the same time, you need to go to the hospital to apply fluoride to your child regularly.

7. You should start using fluoride toothpaste after you have long teeth. Under the age of three, only the amount of rice grain size should be used. Children can use the amount of pea size after learning to spit toothpaste, and can increase it as appropriate after gargling.

8. Children’s teeth should be brushed by parents until they are 7 years old.

9. Parents can try a timer or sing a nice song so that their children can brush their teeth for 2-3 minutes.

10. Children should brush their teeth twice a day: in the morning and before going to bed. It is better to brush them after each meal.

11. Floss is very important to remove plaque between teeth and prevent gap caries. Children should be flossed from the beginning of their teeth.

12. Provide healthy meals and snacks to your child. If your child really wants to eat sweet or sticky food, eat it together and brush your teeth immediately after eating.

13. Consult a child’s dentist about pit and fissure sealant. Pit and fissure sealant is a simple and painless method to prevent caries. A thin resin layer is applied to the pit and fissure of the posterior teeth and quickly solidifies to form a protective layer against bacteria and food. If small cavities are accidentally covered by sealant, caries will not spread because bacteria are enclosed and isolated from food nutrients.

We cannot require parents and journalists to have sufficient knowledge of oral health care (although this should have been their duty). Even from the perspective of goodwill, Assuming that parents do not have the heart of malicious blackmail, But had not noticed that the child’s dental disease had developed to such an extent before, This kind of carelessness and neglect is also very rare. Even from the perspective of goodwill, assuming that the reporter did not mean to impress the public, but made the matter public out of indignation, the lack of professionalism and the lax news production process are also very speechless.

However, regardless of other considerations, when we see the baby photos in the news, the first thing we should call out loudly is: parents of the baby whose teeth have been cut off, your child’s dental caries should be repaired as soon as possible!

This article is reprinted by Clove Garden, which is exclusively authorized by the author and Zikou.