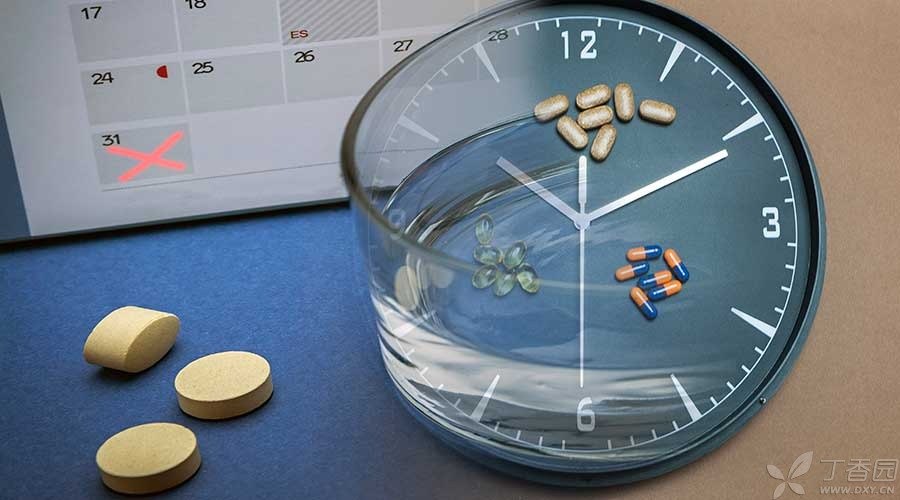 Taking drugs at the right time is related to whether the drugs can work best.

Generally speaking, according to the time relationship between taking medicine and eating, it can be divided into four time points: before, after, during (during) and between meals (the midpoint of the interval between meals). Unless otherwise specified, the medicine is taken for half an hour before and after meals.

Most of these drugs are weakly alkaline inorganic salts, such as aluminum hydroxide, magnesium oxide, magnesium trisilicate, calcium carbonate, etc. and their compound preparations. Their main function is to directly neutralize gastric acid, which can quickly relieve stomachache. Gastric acid is necessary for the stomach to digest food. The purpose of taking antacid drugs is to neutralize excessive gastric acid, so it is best to take it when the food in the stomach is close to emptying.

It is recommended to take it 1 ~ 1.5 hours after meals and before going to bed or when symptoms such as acid regurgitation and heartburn are obvious.

Due to the short action time, more side effects and less ideal overall curative effect of antacids, they have been rarely used in recent years.

The mechanism of reducing gastric acid by such drugs is not direct neutralization, but after absorption, they act on cells secreting gastric acid and inhibit gastric acid secretion. The effect is not as fast as that of antacid drugs, but the action time is long, the side effects are few, and the gastric acid reduction is obvious, thus the curative effect is outstanding, and it is the main drug for the treatment of gastropathy.

There are cimetidine, ranitidine, famotidine, nizatidine, etc. These drugs have no obvious irritation to gastric mucosa, and their absorption and utilization are basically not affected by food. Generally, they are required to be taken after meals, but it is no harm to take them before or during meals.

The acid inhibition effect is more powerful and lasting, and the curative effect is more prominent, including omeprazole, lansoprazole, pantoprazole, rabeprazole and esomeprazole, etc. Because the absorption and utilization of these drugs are mostly interfered by food in the stomach, it is better to take them on an empty stomach before meals.

The main function of these drugs is to protect gastric mucosa and reduce the stimulation of various factors to gastric mucosa. Whether the drug can give full play to its effect depends mainly on the concentration of drugs in the stomach and the time of contact with mucosa.

The presence of food in the stomach will affect the concentration of the drug, but food can reduce the gastric emptying rate and prolong the contact time between the drug and mucosa. It is recommended to take the drug between meals. Specific drugs have different characteristics and the appropriate taking time is not exactly the same. For example:

Domperidone, cisapride or mosapride are commonly used and are taken before meals, and the efficacy just reaches its peak when eating.

Trimebutine has a two-way regulating effect on gastrointestinal smooth muscle movement and should also be taken before meals.

A medicine for cure Helicobacter pylori

Bismuth and proton pump inhibitors are taken before meals.

Clarithromycin is best taken on an empty stomach before meals. If gastrointestinal irritation occurs, it can also be taken after meals or during meals. Amoxicillin is well absorbed after oral administration and is not affected by food. It can be taken before, after and during meals. Metronidazole, tinidazole and furazolidone should be taken after meals to avoid or alleviate gastrointestinal irritation symptoms that are more likely to occur.

What if I forget to take the medicine?

Remember: under no circumstances should you double your medication.

For example, if you forget to take pantoprazole enteric-coated tablets, you should take the dosage of the day immediately after remembering it on the same day. If you remember it the next day, you don’t need to supplement the dosage of the previous day, but you can still take it as usual according to the doctor’s advice.

If you often forget to take medicine, you can prepare a small medicine box or set an alarm clock. You can also use the medication reminder function in the [Doctor Clove] App.

Generally, drugs are safe and effective at conventional doses, so they must be taken strictly according to the doses and methods prescribed by doctors. If the dosage is increased without permission, adverse drug reactions and even poisoning will increase. If the dosage is reduced by itself, the therapeutic effect of drugs will be affected.

Adverse reactions of some drugs can be reduced or avoided, such as:

Proton pump inhibitors may cause headaches or gastrointestinal reactions. Drink plenty of water during the medication. If dizziness is severe, stop driving or take part in any work or activity that requires vigilance. These symptoms will ease or disappear as the body adapts to the medication.

If bismuth is taken, the stool may be black, which is a normal phenomenon without anxiety and can be recovered after withdrawal.

However, if the above adverse reactions affect life or do not disappear all the time, or other reactions affecting life, such as rash, occur after taking drugs, please see a doctor in time or call the doctor or pharmacist.

Can I take other drugs at the same time?

Due to the mutual influence between drugs, the more kinds of drugs are taken, the higher the possibility of adverse reactions.

If you go to the hospital or go to the pharmacy to buy drugs during taking several stomach drugs, whether it is related to the current disease or not, you should tell the doctor or pharmacist the name of the drug you are taking. It is recommended not to take herbs, nutritional supplements and other drugs by yourself.