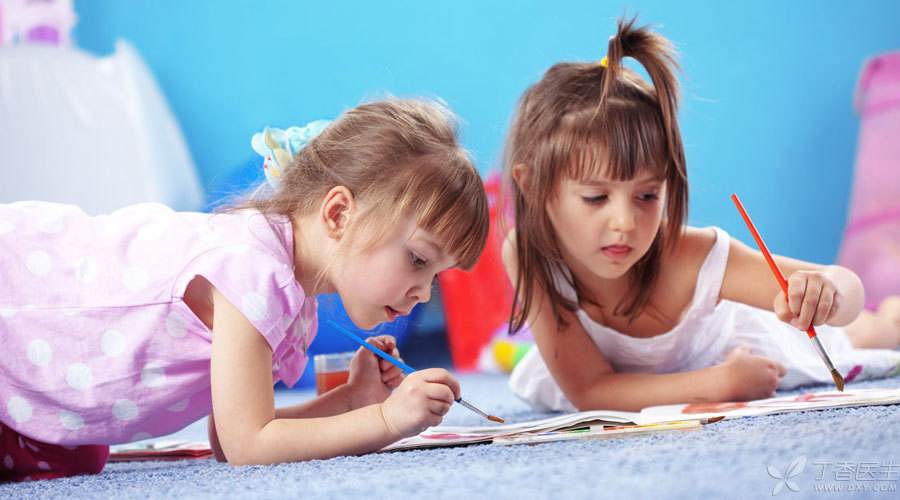 A few years ago, I immigrated to the United States with my husband and gave birth to my son [Cat Darling] in 2013.

After traveling around, I found a university with its own kindergarten, California State University at Fulton.

With some other reasons, I came up with the idea of taking my son to study together and was lucky enough to enter this university smoothly. Let me introduce this different kindergarten to you.

He is said to be a [village] because the kindergarten has a small [farm] with turtles, birds, rabbits and vegetable gardens, all of which are all kinds of vegetables grown by the children themselves, and of course there are many plants.

He said he was a [earth] village, because this kindergarten is a large family besides most white children, as well as children from Mexico, Vietnam and South Korea, and my Chinese son.

Teachers treat each other equally, and the children play together and enjoy themselves.

A kindergarten that can be entered after just three months.

This kindergarten is divided into three classes according to age, but the same class may be divided into multiple groups:

There is a bird’s nest group in the kindergarten class. The rigid ratio between teachers and children at this age is 1: 2. Parents are required to carry formula milk or breast milk, supplementary food, red fart cream, etc. Teachers are responsible for feeding children and changing diapers at certain time intervals.

Each baby has its own fixed bed, small swings and massage chairs suitable for babies, and a relatively open area for older babies to climb.

There are two groups of children in the kindergarten class. One group is the turtle group, which is a 1-2-year-old toddler. The ratio of teachers to children in this age group is set at 1: 3. The other group is butterfly group, 2 ~ 3 years old, with a teacher ratio of 1: 4.

In addition to dividing classes, children are divided into groups at a level according to their age every half year old, and education plans are customized according to the interests and abilities of children of different ages: cognition, body, social emotion, etc. to help children grow up healthily. The number of students in this university kindergarten is still quite small, and children can be better cared for by more teachers.

Squat down and say hello to the children.

The director of the garden is very kind. The children can call him by his first name. When talking with the children, he will squat down and look at the children to understand their needs.

In less than half a year in kindergarten, the two-year-old cat darling will wear her own clothes and shoes, although most of the time she wears them backwards. Little people can eat independently and no longer lose rice grains. Can take the initiative to help my mother carry a bag and pull it to the door. Able to voluntarily throw their own garbage, diapers, empty beverage bottles, etc. into the garbage bin; I will cover my own quilt when I sleep at night. Every person has a sweet mouth. He will call his uncle and aunt and say hello…….

All this surprises me.

The working hours of kindergartens are from 7: 00 a.m. to 7: 00 p.m. for 12 hours, which can be convenient to parents who are busy and have irregular hours to the greatest extent.

Moreover, for parents who are also students themselves, they can put their children into kindergartens at the same time according to the class schedule, which greatly facilitates [mother students].

It doesn’t matter if you come late, but the time to pick up the children must be observed. If you are late, you will pay $20 in the first 5 minutes, $1 in the second minute and settle at the end of the month.

Because they think that work must be paid, teachers cannot leave work, they have to work more, and you have to pay for the work. Of course, occasionally a few minutes late, also not so haggle over every ounce.

Kindergartens provide meals, but for older children, the children eat them themselves after the meals are served, and the teachers do not feed them or force them if they do not eat them.

The teacher thinks that children will eat naturally when they are hungry.

Step 2 Sleep as long as you want

During the nap time, you can roll over and over in bed, but you are not allowed to talk or get up.

The teacher believes that no matter eating or sleeping, one should develop according to the nature of the child.

The main job of these kindergarten teachers is to make children have fun in kindergartens, cultivate their independent personality and help them to better establish partnerships with their peers.

The kindergarten not only takes the children to play in the yard every day, but also has art classes. The teacher will put the children’s works in the personal belongings box outside every day and take them home by the parents.

For a long time, I found that Cat Darling’s work is to draw a line on a piece of white paper. Or three lines, see other people’s masterpieces have a lot of colors and lines, the in the mind is very uncomfortable. But the teacher said that cat darling didn’t like painting very much recently, but he liked dancing very much. He was very happy to swing with music. He should find his own interest and respect the children’s interest. The teacher’s focus is to stimulate potential and creativity.

However, a month later, he suddenly fell in love with painting again, and there were always [masterpieces] that surprised me.

Discipline of children does not depend on beating, but on time-out.

For disobedient or naughty children, teachers can neither beat nor scold them, because it is illegal in the United States. Once reported, teachers will be suspended immediately, followed by investigations and prosecutions, ranging from fines to prison.

How do you discipline it?

Don’t underestimate these few minutes. The United States advocates freedom of personality. These short minutes have no freedom. The shock to children is big enough. The teacher’s move [timing isolation] is very deterrent to children.

Clearly record the poop situation on that day, how much water you drank and whether you had a good meal. Parents can know from this record that their children have made what and eaten what today.

Of course, the kindergarten will send the specific contents of the weekly recipes, studies and activities to parents by email in advance for reference.

California is dry and short of water, and is also an earthquake plate. Therefore, earthquake drills are a compulsory course for children.

With a deafening sound, all the children quickly moved to safety hand in hand according to the instructions, and the infants who could not walk were moved by the teacher.

Recently, there was also a fire drill. The teacher and I praised the cat darling, saying that he responded quickly and listened to the instructions!

The internal settings of the school are also very detailed and safe. The door locks, drawers, closets, refrigerators, etc. in the kindergarten are all covered with condoms, which children cannot easily open. Furniture is generally specially designed for children, with rubber cushions on sharp corners. The power supply is plugged with plastic sleeves. Indoor play areas and outdoor playgrounds are equipped with suitable facilities and cushioned according to age.

In such an environment, children can run freely and safely.

Now the cat darling will say to me every morning, “good morning, mom!” Shall we go to kindergarten today? ]